Monthly archive for May 2013 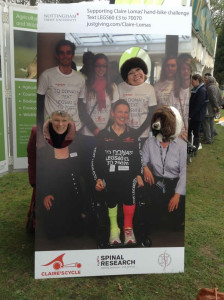 Here we all are, myself, Joe and my writer Kay Winfield, at the Chatsworth Horse Trails on the 17th May.

The photo was taken to support and promote Claire Lomas’ hand bike challenge for spinal research.  Text LEG560 £3.00 to 70070 or give via the web address www.justgiving.com/Claire-Lomas. 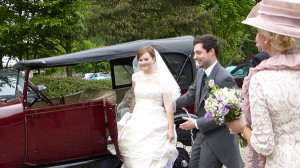 This is the second family wedding we’ve enjoyed at All Saint’s Church here in our beautiful village of West Markham. Despite our concerns, the weather held and although the sun wasn’t shining, it didn’t actually rain thank goodness, although there were some wonderful brollies and matching wellington boots all lined up at the ready! The flowers were very traditional, blush pink, old fashioned tea roses, thistles, herbs, daisies and night scented stocks filled the church with their heady aroma. Ours is an exquisite church, steeped in history and there was an air of excitement as we waited for the bride to arrive. The pews were lined with family and friends, the girls chatting animatedly in excited whispers, their hats and fascinators of all colours, shapes and sizes bobbing up and down and seeming to have a life all of their own. After a few nervous glances, and a rather worried looking Gee, the sound system eventually burst into life and the music heralded the arrival of the bridal party, Martin who had looked very pale and nervous got a bit of colour back, Sue (Aimee’s mother) looked fabulous in a black and white outfit which really suited her and the bridesmaids (Victoria, Katie and Natalie, Aimee’s sister) were in elegant, dark blue, satin and organza dresses. Aimee however, quite rightly stole the show, she looked stunning in a blush beige, full length lace dress and matching veil, she was accompanied by her very proud father Barry with not a blush in sight, he looked very happy but actually more ashen than beige!! Words ‘warm seat and paper in hand’ come to mind and I don’t mean his armchair and speech!

The wedding service was beautiful and expertly delivered by our wonderful vicar, Colin Wall, who manages to put everyone at ease with his charming sense of humour and despite Martin being a bit keen and jumping the gun with his “I Do” the ceremony went without a hitch!

As the newly weds were carefully driven back to the reception by cousin Chris Hewgill in his Model A Ford I couldn’t help thinking as they went down the cherry tree lined avenue to Aimee’s home, where the reception was to be held, it looked very appropriate with the cherry blossom falling onto their car like confetti, just like it had on the church steps as they left.

So, feeling pensive, after a very busy weekend here in West Markham with the wedding on Saturday and the Lancaster Bomber flying over yesterday to commemorate the memorial in the Mausoleum, I couldn’t help thinking what a great privilege it is to live in this wonderful village……it’s not so much its beauty, it’s much more than that, it’s the easy chat and jokes with our lovely neighbours, catching up with those who we haven’t seen for a few weeks, the DVD which recorded the proceedings yesterday which turned up on my desk this morning (thank you whoever that was) it is having a sense of belonging to a community, with everyone having a job to do and quietly getting on with it, not seeking any praise or reward, save that of knowing that they ‘they did their bit’, just as with the wedding, the family all pulling together as one life force and as a result, something truly memorable and remarkable happens.

Spring seems to have finally arrived thank goodness, the grass is growing a little and the swallows are back!

We’ve had lots of successes this month, Amelia has just found out that she’s passed her PTT, I’ve upgraded to List 4 judge and Matt has had his first book published. It’s on sale on Amazon and available in paperback or electronic forms. It’s called Witch Angel and Warrior King and has had some super reviews.

Clients continue to do well too! Mandy Denley and Binks had terrific scores at Hargate, 1st with 76.66% in the Preliminary 13 qualifier and another 1st in the Novice 27 (training) with 67.9%. I wish Mandy the best of luck in the Regional Dressage Championships next weekend, let’s hope the northern teams do well.

JenniferBaker with Skerne Skyvara (Hattie) at
Richmond equestrian centre on the 27th April, a very impressive 2nd with 62% in the Elementary 50 and 57% in their first ever Medium! A super result as Hattie not always the easiest of mares and needs a really sensitive and educated rider. Sunday 12th May……1st with 62% in the elementary this time it was Louis’ turn. Jennifer said he came back at her a bit in 2nd half but the Medium was much better and he got 61% with eight 7’s and also two 4’s! A really good result again for Jennifer.

Tracey, who always tells me she can’t compete, completed both of her tests. Stayed in arena even though Thyme was very spooked. They did Intro A and got 66.5% and 2nd place, with A Peel judging. Then Intro B with 66.08% and got 1st. L. Tolan judging. Tracey said she was “totally buggered but elated”. Brilliant!!!!

Chatsworth Horse Trials is on this weekend coming, I’m judging, but it’s an early start! The first horse comes down the centre line at 8am! Then in the evening we have a champagne reception hosted by the Duke and Duchess of Devonshire, hopefully I’ll be able to stay awake!

The weekend of the 17th and 18th of May will be a busy one, my niece Aimee is getting married on the 17th and then on Sunday we have a Lancaster Bomber flying over the Mausoleum in Milton. This is to commemorate the death of a young 22 year old bomber pilot and the six members if the crew who were also killed, when their plane crashed on the top of the hill in the field by the Mausoleum on the 2nd of December 1943. The pilot was trying to land at Gamston in thick fog, but ran out of fuel, he’d tried to land at Ossington but over shot the runway, he then tried to get to Gamston and you know the rest.

If anyone wants to come and see the Lancaster fly past, it will be coming over the Mausoleum on the 18th of May at 11.15. Everyone is welcome; proceedings will start at 11.00 at the Mausoleum.

Finally, look out for Your Horse Magazine again this month, we’ve been working on an article which is going to print on exercises you can do with your horse both in the school and out on a hack to improve your horse’s performance.

Keep letting me have your results and successes!